Suharto was Indonesia’s second president, effectively overthrowing his predecessor Sukarno in a 1965 coup. As one of the leaders in the struggle to wrestle independence from the Dutch, Sukarno was anti-imperialistic in temperament, and began to ally Indonesia with both Russia and China. By 1965 the Indonesian Communist Party (PKI) had some 3 million members.

All this changed when Suharto took over the reins. Although Sukarno was still nominally president, Suharto was now calling the shots, having taken control of the army. Along with religious leaders, he inspired and led a purge of communists, initially in Java, but spreading out across Indonesia. Communists, and those suspected of communist sympathies, were ousted from the military, government and any positions of authority. The purge then spiralled into a bloodbath, with estimates suggesting more than half a million people killed over a two year period. 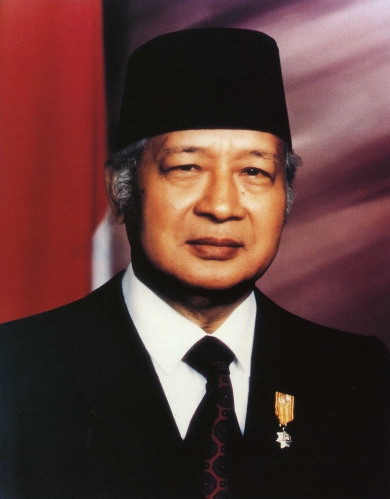 A timely reminder of this appalling episode in Indonesia’s history comes in a newly released documentary, The Act of Killing, by Joshua Oppenheimer. In this film, which is attracting attention from all over the world and garnering excellent reviews, Oppenheimer makes the acquaintance of former death squad members and has them re-enact their murders for the cameras.

Aside from the surreal and bizarre sight of a septuagenarian in a batik shirt simulating a garotting between dance moves, what strikes me most in the short clips I’ve seen are the similarities between Suharto’s death squads and documented accounts from former torturers in Latin America, particularly El Salvador. In both cases their recollections reinforce the long-held claim made by human rights organisations such as Amnesty International that torture not only degrades the victim, but has the same effect on the perpetrator. Like the Salvadorians, Suharto’s killers seem condemned to remain forever haunted by the monstrosity of what they once did, their sole refuge from their crimes coming in transitory oblivion through alcohol and drugs.

Suharto’s communist purge took place a decade prior to the invasion of East Timor and the main action of Francesca. However, some of the characters in the novel were involved, the events are referred to in the story, and they certainly set the tone for the way the Indonesian forces conducted themselves in East Timor.

View a clip of The Act of Killing at http://www.guardian.co.uk/film/video/2013/jun/26/act-of-killing-indonesia-genocide-video

2 thoughts on “The Act of Killing – Suharto’s communist purge”